Continuing our quest to visit five of the Historic Royal Palaces this year, here is my second entry: Kew Palace. For my birthday weekend a few months back we visited the lovely Kew Gardens and Kew Palace, the weather was lovely and we were so tired from walking everywhere but would definitely do it all again.

To get there you can go on the underground straight to Richmond, but we went to Waterloo and hopped on a train. It was about a 15 minute walk from Richmond station to the south west entrance of Kew Gardens. With the Historic Royal Palaces Membership entry is free for Kew Palace, but you need to enter Kew Gardens first to get into the palace, which is not free but there was a 10% discount with the membership.

Entry to the pagoda is not free, but free entry is included in the Royal Palaces Membership. This was a beautiful building with colourful dragons perching on the outside, imposingly looking down. These dragons have only recently (2018) been restored and placed back on the pagoda.

We walked nine floors up a spiral staircase, there is no lift, but the best views are naturally from the top floors where you can see Temperate House, a golf course, and tennis courts. Some of the floors had a little history written on the walls which was nice to read, and sometimes the spiral staircase was a little dizzying as you are going up, but you can get a little reprieve on each floor and there are benches on the lower floors. 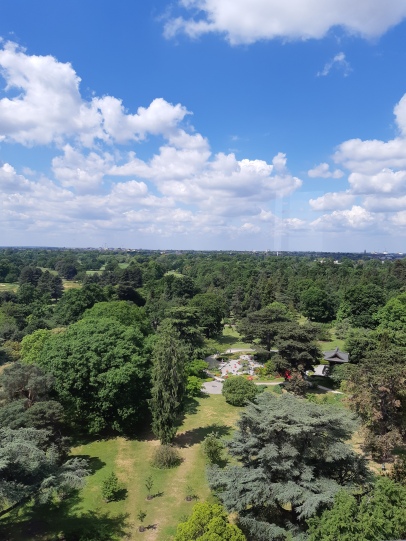 The ground floor is free to have a look around, where there are mechanical displays showing the pagoda being put together and the architect who designed the pagoda travelling on boat from Canton to England. 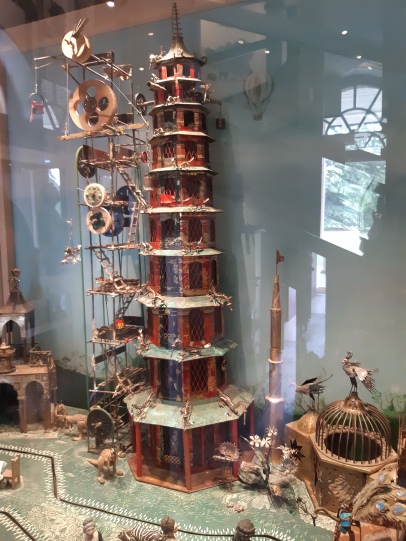 Not too far from the pagoda is a small tranquil garden inspired by Japan and a Japanese gateway. The gateway is a replica of the Karamon of Nishi Honganji Temple in Kyoto, which was made for an exhibition and then moved over to Kew.  It was quite peaceful here and it was from this point onwards that I noticed how many bumble bees there are in these gardens. 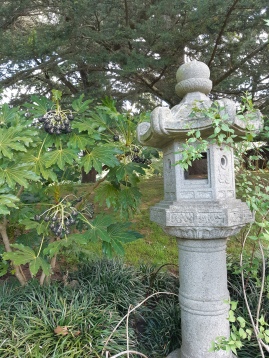 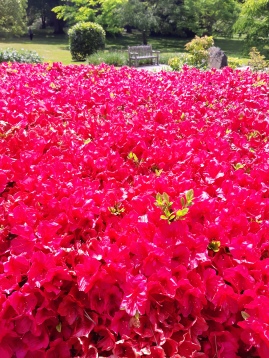 Next we made a quick trip to Temperate House, which houses rare plants from around the world. Sculptures are inside and laced amongst the plants, I imagine due to an exhibition. 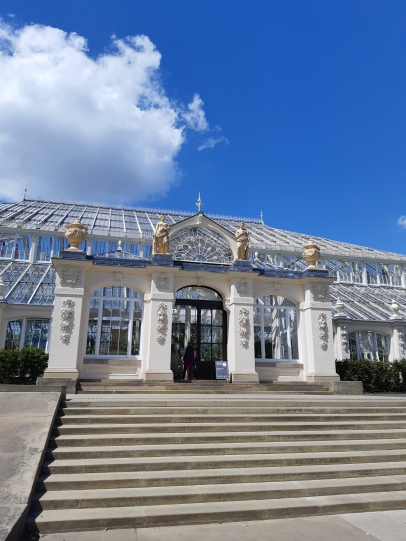 Next up was food, and the food was absolutely amazing, probably the best chicken I’ve had in a long time, sorry Nandos. The food was so good. For those with Historic Royal Palaces Membership this restaurant does not offer the usual 10% off as it is technically in Kew Gardens and not Kew Palace, but if you’re after a tasty hearty meal this is the place to go. 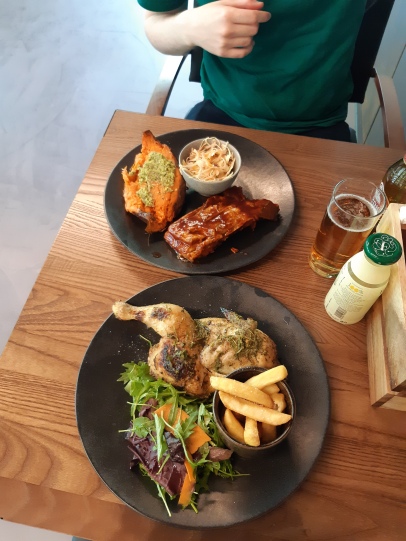 We walked through the Ruined Arch and walked past The Marianne North Gallery and the main entrance into the gardens to find ourselves in this lovely open space next to the Palm House where across the water was The Botanical. Here, there were the largest dandelions I had ever seen, absolutely everywhere.

En route to the Kew Palace we walked through Broad Walk which had many lovely flowers and bumble bees and we then passed The Orangery, a beautiful white building that looked very popular. You can hire it out for private functions, but I imagine it would be quite expensive.

We reached Kew Palace, which turned out to be free, and there were a couple of staff members dressed in Regency clothes outside which was interesting. Apparently this is the smallest of all the Royal Palaces, and I suppose it didn’t take us very long to walk around it. Inside the palace many rooms were left as they were, I believe the princesses’ bedrooms and a couple others, as after Queen Charlotte’s death the children stopped living there.

It was interesting learning about the history of King George III, the mad king. His Queen Charlotte was chosen to marry him as she wasn’t well educated, and back then the court deemed women in politics as not a good idea, even though there had been plenty of queens and women in courts before.

Behind Kew Palace was the Queen’s Garden, which was lovely and peaceful and quite colourful. We had a great time exploring this area.

Near Kew Palace is the Royal Kitchens, which has two floors. I thought it would have been difficult many years ago for the cooks to carry the food and everything from the kitchens to the dining rooms in the palace. Interestingly there was a bath tub in one of the rooms, and apparently King George would take his baths here in the kitchens so the servants didn’t have to carry the hot water over to the palace. Practical, I suppose.

Next we ended up walking westwards to the Minka House, which is within the Bamboo Garden. Brought over from Japan, previously the house was used for silk related activities to produce and sell silk and these are actually traditional houses in Japan.

We continued our way westwards and came across a modern-looking bridge over the lake. What was interesting about the bridge was that at a distance it looked like a curved bridge with two walls either side of the walkway, but as you walk along the bridge you realise there is no wall. There are just numerous posts next to each other, close enough to make it seem like a wall, but really you can fit your hand between them if you wish and accidentally drop something in the water.

We made our way southwards and found the Treetops Walkway. We walked up the metal staircase and walked clockwise along the walkway, surrounded by tall trees. Up here there were also facts about the trees. Quite stable and wide, the walkway is accessible to everyone as there is a lift too. Not advisable to those afraid of heights though as it can get a little windy up here.

We were trying to get to Queen Charlotte’s Cottage, but on our way north westwards we came across a peacock chilling in the sun near the Waterlilly Pond. So beautiful, just lounging on the grass, having a splendid time. 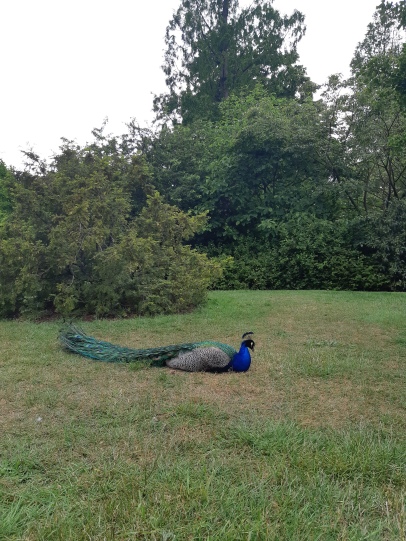 We continued walking northwards, perhaps a little too far. I think we ended up by the Thames river, the northest part of the gardens. In the distance you can see a grand looking building, which I thought at first to be the Queen Charlotte’s Cottage we were after, but then figured that we couldn’t get across the river and therefore it couldn’t possibly be the Cottage we were seeking.

As we headed back southwards we came across the Log Trail, which we thought could be a shortcut to the Cottage. It was not a short cut. It went round in a circle! A fun place for kids, not for prams though, because of the bark.

As we were getting tired from our epic walking, we gave up on finding Queen Charlotte’s Cottage, and headed towards the south west exit where we entered. Next time we will see the Cottage. I must admit the map was a little confusing, as it seemed like we got quite close to the Cottage, but could not see it anywhere.

Although we didn’t find the Cottage we had a lovely day out in the sun, and saw so many bumble bees hovering around the flowers. We didn’t see much south east of the gardens or spend much time inside the greenhouses either, maybe next time.

I think we would definitely come back to Kew Gardens, perhaps not to view Kew Palace though. It really is quite a small palace, and I imagine the exhibitions inside do not change often. Apparently there is also a really good light show during Christmas in the gardens outside, so potentially we’d come back to see that too.

Definitely worth a visit again. Some more pictures of the day: