We visited Dover Castle recently and it was a great place to spend the day – there is so much history that I didn’t know about. We spent about 5 hours there, which we were not expecting, and it was such a nice day out that I wanted to write a post if anyone is considering a visit.

We took the fast train to Dover Priory train station from London St Pancras, which is apparently the UK’s fastest train, and therefore surprisingly not nauseating to travel on. Once we arrived it was a hilly 30 minute walk up to one of the pedestrian entrances to the castle grounds, and it really was a bit of a work out just to get there. Very uphill, the famous white cliffs are another 30 minute walk away so advisable to a get taxi there to walk around the cliffs. The map of the castle ground isn’t great but the place is pretty well sign posted so you won’t get entirely lost.

Within the main keep, the first place we visited was Arthur’s Hall, where the story starts. And, interestingly, where you can’t actually get out.

Stated as the “Start of the Story”, this exhibition charts the medieval history of the castle grounds, the strengthening of defences after the Battle of Hastings, and the famous sieges by the French against King John. There was a whistle-stop history of Henry II, the first Angevine king, and his children, Richard the Lion Heart and King John of Robin Hood fame who signed the Magna Carta; and famous wife Eleanor of Aquitaine and Henry II’s mini European empire. Dover Castle was his monument of power to show off to other European monarchs, a sea based defence, the importance of Henry II as king was that he claimed a lot of land and he got a lot of French land that subsequent monarchs lost.

The main attraction: this tower was very cool on a hot day, there are a lot of spiral stairs and some climbing involved, some of the higher up areas are a bit are more treacherous but places lower down are fine. 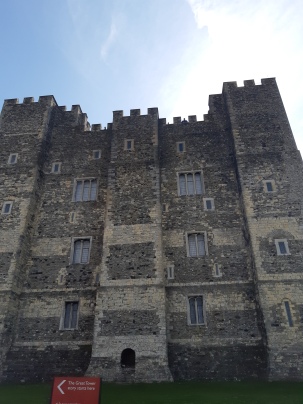 Staff members in costumes are in some rooms, playing with kids, or you can ask them questions. Rooms are decked out in medieval finery to show what they would have looked like in Henry II’s time, including the popular throne room, a banquet hall, and various bedrooms.

We found a cold chapel with beautiful stained glass windows. There were so many floors and it was all very maze-like, I wondered that if anyone had ever taken over the castle people would still be able to hide in places high up in the castle and not be found.

The views from the very top are amazing: you can see the sea, the cliffs of Dover, and the harbour. It was breath-taking. On such a clear sunny day, the sky was so blue and wonderful, you could see miles away. 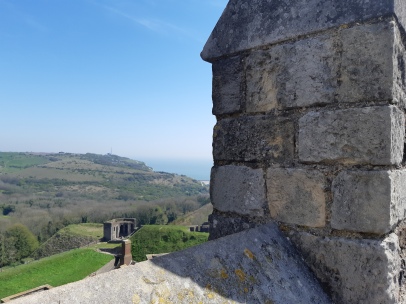 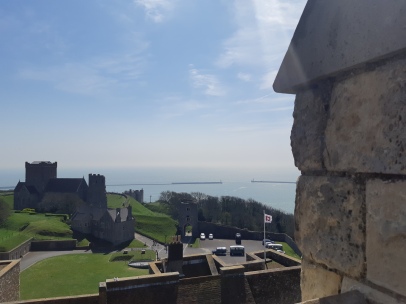 Within this main area there was a cute little shop selling medieval items, keeping with the theme, and a cafe which we didn’t go into but it looked quite popular. There were benches around this area and families are welcome to have a picnic here. Near the bottom of the tower are medieval tunnels with, again, a lot of stairs. We didn’t go in the tunnels, as we felt we did plenty of climbing thus far.

We followed the wall around the castle grounds where WW2 artillery guns are dotted around. Quite a peaceful walk with some steps and slopes but mainly a wide grassy area, quite different from the narrow spiral stairs within the main tower. For people with height issues it’s not too bad a walk, although you are higher up and outside near the sea, it wasn’t actually windy at all here.

As we continued walking southwards we could see the cliffs and the sea again from a different angle. We could even see the beach nearby. 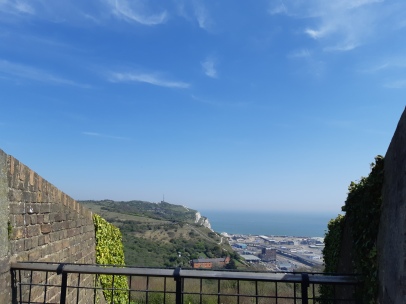 On our way down some pretty steep and precarious looking steps we could see the army barracks. Such a lovely building on the outside, but there is no exhibition or anything inside so you can’t go in. I can imagine potentially people getting married here and the pictures would look amazing. 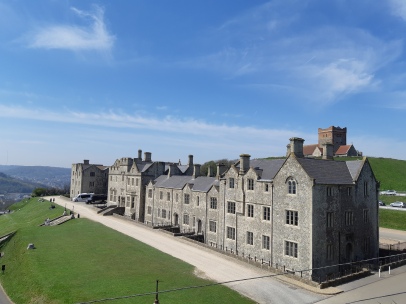 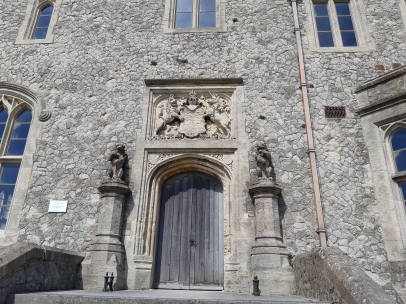 We continued walking around and reached the restaurant, where you can get cold sandwiches or hot cafeteria food. We had a mini roast dinner which was quite reasonably priced. Inside was an ironically named “pocket cannon” that was actually a very large cannon. Nearby was a very popular ice cream parlour, and it was a long queue in the sun, but totally worth it. Dogs are allowed in the grounds, so it was nice watching a couple of dogs being adorable while we waited for ice cream.

One of the highlights of the attraction, there are two tunnels, a hospital and war bunker. It was quite a wait before going into the war bunker, the hospital was a shorter tour so had less waiting times. For the war bunker there are groups of 30 odd people who can enter at a time because once inside there are rooms that can only really fit 20-30 people. Waiting wasn’t too bad though with such a lovely sea view.

Worth the wait to go in. Give your eyes a few moments to adjust to the darkness of the tunnels, it was a really sunny day so I was a little disorientated going in but by the time we entered the first room there was lighting and my eyes were able to adjust and see again. The tour takes you through to the lead up to WW2, showing how casemates were used for Operation Dynamo: the rescue from Dunkirk. It was visual and audial, with projections on walls, it was really well done and interactive so really good for children too. It was also a bit surreal standing in one of the casemates used to plan Operation Dynamo.

The end of the tour leads you to another shop, this one is more focused on WW2 rather than medieval items, inside there is another small café and also some amazing views looking out to the sea and harbour.

Not too far from the tunnels, up another steep hill, is the Admiralty Lookout which was used during the wars. There is still a tall naval signalling mast here that was used for communicating with ships. Now mainly used as a viewing platform, you need to climb up the metal stairs to get the views. Closer to the sea, so it was very windy here, and I must admit I was a little afraid to stand too close to the edge of the railings. The view was kind of worth it, again amazing sea view and here you can see a little more of the cliffs, but man is it windy.

Not far from the viewing point is the older section, where there is an old lighthouse and a Roman Anglo Saxon church. This lighthouse is allegedly one of the oldest in Britain, and only one of three lighthouses to survive from the former Roman Empire.

This church, right next to the lighthouse, is still in use today and you can still see the Anglo Saxon masonry and the lovely stained glass windows. On display there are also bits of pottery and relics that have been dug up over the years.

Not a large town, didn’t see much of it, just the route from station to castle and back again.

There are events that happen in the castle grounds, but when we went there wasn’t anything going on, but still definitely worth a visit. Open 10am to 6pm, around £21 per adult, £12.50 per child. It was a lovely day trip and I felt we had sufficient time to see everything and we weren’t rushing. Our next trip to Dover will probably be to see the cliffs. 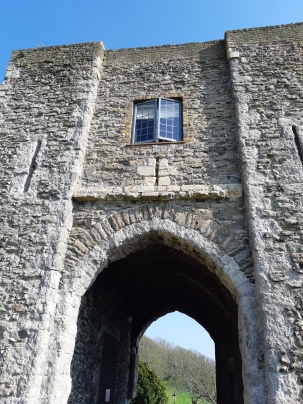