Recently we went to the Van Gogh and Britain Exhibition at the Tate Britain. We made the mistake of heading over to the Tate Modern, which is 45 minutes away from the actual exhibition. My bad. When we eventually arrived at the correct place we didn’t realise it would be so busy: there were lots of people, as expected, but the exhibition was quite cramped, maybe there was a lot to fit in a small space.

Having been to the Van Gogh Museum in Amsterdam I’m aware that the artist spent some time in Britain in his younger days, and there was evidently a heavy agenda here about how Britain influenced his work. The first exhibit was a row of Charles Dickens books that Van Gogh likely read, they weren’t his actual books though, just some old editions of books he may have owned or read.

There were a lot of exhibits stating the influence of British trains and poverty in Van Gogh’s work, now I admit I didn’t get an audio guide so maybe there would have been more compelling evidence of this British influence had I listened. I do recall many paintings of humble peasants in the countryside though, so there may be some truth behind this British influence.

I appreciated the sketches in this exhibition, of which I don’t recall there were many in the Van Gogh Museum in Amsterdam. It showed his skill: performing delicate yet accurate work. I also saw a painting I had not seen before and the colours were magnificently vibrant. It was one he painted whilst at the Saint-Remy hospital later in his life. 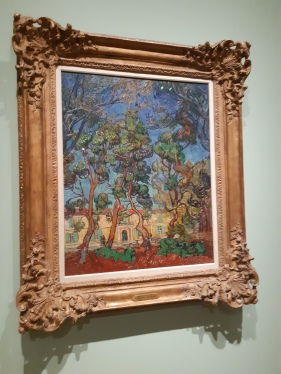 There was also one of the Sunflower paintings included too.

One painting I was looking forward to seeing was Starry Night over the Rhone. My favourite painting of the artist would be The Starry Night, which unfortunately wasn’t included here as it is currently in New York’s Museum of Modern Art.

An ok experience, and as I say, not quite what I was expecting. If you want to learn more about the artist and his life and see more of his paintings I would of course suggest the Van Gogh Museum in Amsterdam.