Continuing from part 1, here is the second part of some great places we visited on our trip to Amsterdam. This part focuses on the Museum Quarter, Southern Canals, and Lisse which is just outside of Amsterdam.

South west of the main city centre is the Museum Quarter, which boasts so many great places to visit: the Concert Hall, Stedelijk Museum a museum of modern art and design, Moco Museum which is currently showing Banksy’s art, Diamond Museum, House of Bols a cocktail museum, Van Gogh Museum, and the Rijksmuseum. Museumplein, a public space between the Rijksmuseum and the Concert Hall, is great to walk along too with a pathway of beautiful tulips, cafes, and a gift shop.

This was an unexpected gem: it was really popular and also very insightful. The museum is about the artist’s life in chronological order, helping show how seriously Van Gogh took his art, how his skill developed as he went on, and how he socialised with different artists which gave more emotional heft to see his paintings – especially towards later on in his life when he was in an asylum. It changes the way you see his art based on where he was when he painted and how he felt at the time. The museum also included paintings that inspired him, like Japanese art and pastoral scenes; and then paintings that he later inspired, charting the significance of his part in the art world.

The museum was very busy and very popular, with people taking pictures of paintings even though they weren’t supposed to, but the museum accommodates for this by putting famous and popular paintings on their own wall so more people can view it (or take a picture of it). The media guide device was interactive with both auditory and visual aides, but oddly the exhibits weren’t in numerical order. It was clear not everything was on display as the media device had more exhibits that we couldn’t find on the walls or in the rooms. If your device stops working and goes a bit weird, like mine did, the staff on the first floor are very helpful and can assist to reset it – it just might take a while to wade through the crowds of people.

There was also an exhibition, Hockney – Van Gogh, that only opened in March this year. Essentially a modern gallery featuring work by artist David Hockney who took a lot of inspiration from Van Gogh, and the exhibition places Hockney’s work against Van Gogh’s pieces to further highlight this. Some of Hockney’s pieces were very striking and evocative, such as trees and changing seasons and a work in progress painting on an ipad sped up – you can clearly see the muse of Van Gogh in Hockney’s work.

The café on the first floor was nice, with plenty of choice of both hot and cold foods, and interestingly wine dispensed from machines. The seating can be a bit awkward for small parties sharing with others on large tables though, but there are a handful of smaller tables too. Definitely worth a visit to this brilliant museum and I would advise booking online to skip the queues and avoid being disappointed. It took us about three hours or so to walk around, listening and watching the media device, and taking in the paintings – so I would say pretty worthwhile. The media device is not included in the price, €19 per person, but entrance to the Hockney – Van Gogh exhibition is.

We had bought a couple of prints from the Van Gogh Museum as souvenirs, but were oddly told to leave them in the free cloakroom here, I suppose to not encourage others to check out the competition right next door. There is a free app available to download so no need to buy the multimedia guide device, and there are headphones available for sale too, but some people walked around listening via their mobile’s speakers.

Firstly we walked around the All Rembrandt exhibition which showcased literally all of Rembrandt’s work, except for The Night Watch, which was only on the second floor above. The tour focuses on Rembrandt’s style and technique showing many sketches and etchings. Though the tour was slightly chronological it was not about his life and the rooms were more thematic. There were small pieces in small rooms so it was very crowded and people were walking in front of you to view these pieces and stepping right up to them over the line on the ground indicating not to touch, so I would advise to be assertive in this exhibition. This part is included in the ticket price but you have a time slot to enter and then you can walk around at your own pace. It took us about a couple of hours to wander through looking at only the highlights, so if you’re a fan it could take you longer.

The museum itself is split up into periods of time but are ordered on different floors, so our initial plan of going through in chronological order would have meant walking around in an odd order, and the museum is a bit maze-like.

Next was the Gallery of Honour on the second floor, with high ceilings and paintings on the walls leading to the main event: The Night Watch. This really is massive and so grand, and unlike the All Rembrandts exhibition, no one was stepping over the security line here.

We only really managed to see one exhibition and the national gallery, which was the main event really. The museum is really big, and we had spent a lot of time at the Van Gogh museum and the All Rembrandts exhibition just before, so by the time we had seen the national gallery it was 4.30pm and an announcement stated it was almost time for closing. We managed to speed through a couple of periods on our way out, but would advise to either see this museum on its own or to whiz through the All Rembrandts exhibition to allow more time for the main museum itself. We just didn’t know how big it was.

Open between 10am to 5pm, we were advised to purchase tickets (€19 per person) to the Rijksmuseum online to beat the queues, but there weren’t really long queues here. But booking online meant we were able to book a convenient time slot to enter the All Rembrandts exhibition, which ends 10 June 2019. Before leaving the Museum Quarter we relaxed a little in the garden next to the Rijksmuseum, which is free to enter.

One of the many famous views of Amsterdam, which I wasn’t aware of before this trip, where you can see seven canal bridges from one spot. We first saw this on the Lovers Cruise Canal, previously mentioned in part 1, but couldn’t quite get a picture. So after a day at the Museum Quarter we walked towards the main city centre in the hopes of seeing this amazing view again. Not the best image, I would say the most ideal view would be from below on a boat or at night when the lights are glowing, but still worth a trip to see this amazing view again.

Originally a butter and dairy market, Rembrandt Square is now home to The Night Watch, with many cafes and bars nearby. Rembrandt’s famous painting The Night Watch has been recreated in 3D form, made to celebrate the painter’s 400th birthday, with the sculptures protecting a statue of Rembrandt himself in this square. Fascinating image and quite peaceful to sit in this square. I noticed the cute little dog on the end, just like the famous painting, and had to get a picture.

When finding places to go to or things to do Keukenhof Gardens kept showing up but no one had recommended or said anything about it. But I am so glad we booked and got to see this amazing place. It took about an hour via Metro and bus to get here: the best place on earth. Situated in Lisse, just south west of Amsterdam, I would definitely recommend this to everyone – by far the highlight of the trip. So much so, I want to dedicate another post for this amazing place on its own.

Essentially a massive tulip garden, where most of the world’s tulips comes from, there are bulb fields, a tulip exhibition, flower shows, inspirational gardens, a playground, and a petting zoo. Open 8am to 7.30pm, the gardens are closed for most of the year and only open for two months of the year. All I’m saying for now is: I’m sad I didn’t see anyone propose here in this magical place. 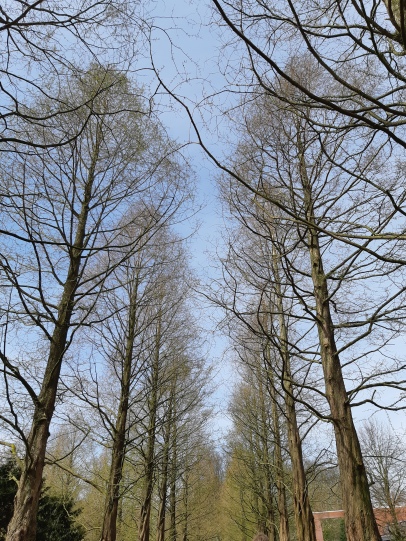 Our hotel offered buffet breakfasts so finding somewhere to eat for breakfast wasn’t an issue for us. There are plenty of waffle and crepe places around in the Red Light District area that are really good. Most places in the centre got a little busier around lunch time, but it was always quite easy to find somewhere for a quick bite to eat. I must admit that I thought these lunch places were quite expensive for essentially a sandwich or a toastie. Supermarkets were really good, offering snacky lunch time items, as well as more substantial snacks if your hotel has a microwave.

In the evenings we saw many people walking around with cones of chips or other small hot take out in their hands. We actually found restaurants quite difficult to find near where we were staying, that is sit down restaurants, as there were plenty of loud bars that also served food. There was a lot of wandering around, so I would suggest that if you’re after a sit down meal in the evening to plan ahead before heading out, as we were wandering around for quite a while only to give up and go to the train station as we knew there were lots of chain restaurants there.

One of the main places people recommended was Anne Frank’s House, which is currently going through renovations. We weren’t aware that, as there are renovations, only online tickets can be bought which is advisable to buy at least a month in advance. 20% of the day’s tickets are released on the day at 9am, and we sat online trying to get tickets but a lot of the convenient time slots were already booked by 9.10 am so we gave up. Another time.

It was a wonderful week and I would definitely return and would fully recommend to anyone who hasn’t been. There are plenty of other attractions to see and things to do, but this list was the top 15 we experienced in five days. If there are any other places that you would recommend, please do let me know as we might check it out for next time.