I love Hampton Court. Back in 2019, the hubby and I were members of Historic Royal Palaces and tried to visit all the English palaces in one year. We managed it and we have since visited Hampton Court many more times. When the hubby found out they were holding a light trail for Christmas, he knew we had to go.

We rocked up at 5pm and it was already dark. The ice rink was just starting to open and there was a hubbub of excitement as people were queueing ready to enter the light trail.

The lights outside the palace switched from hellish red to ghoulish purple and green. I hadn’t visited Hampton Court this late before and the beast statues sure looked a tad more menacing than usual.

We had our tickets scanned and walked through the West Gate into the Base Court, where the words We are all made of stardust lit before us. Stars were lit too and music was playing – it was magical.

We continued onto the Clock Court. Here there was a row of clock faces, where children held their arms up making shadows to try and replicate the hands of time. All around us were shadows of clocks, but the main clock in this court was lit with many colours. 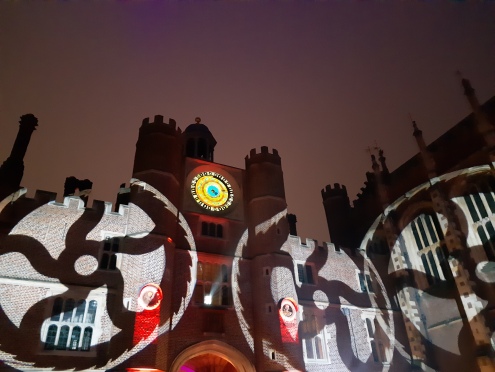 Designed by astrologer Nicolaus Kratzer and then made by the keeper of the King’s clocks, Nicholas Oursian, this illuminated clock helped King Henry VIII tell the time, day, month, position of the sun, and phase of the moon. Pretty nifty considering it was the 16th century.

In this court was also a very tall and bright Christmas tree. This light trail was more whimsical than festive, and this tree was the only Christmas related thing here. 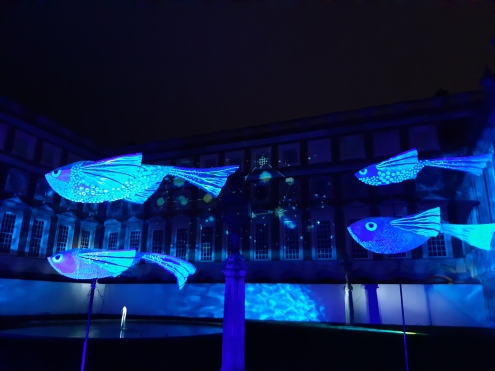 We walked onwards to Fountain Court, where blue wave-like lights projected an underwater tunnel. There were large fish “swimming” or “floating” beside us as we walked along the tide, listening to music replicating trickles of water and fountains. Projected on the palace walls were shooting stars too. 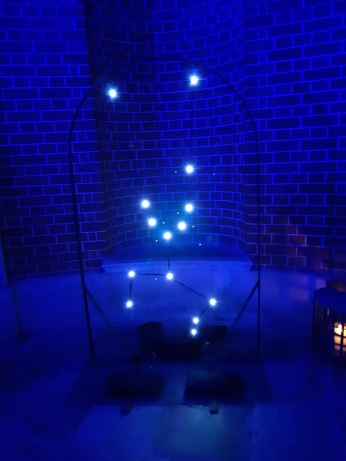 Now we were outside in the Fountain Gardens. The premise of the story here was that the first clockmaker’s assistant passed the secrets of the astronomical clock down the generations, and here, the yew trees whispered some of those secrets too. Here it was darkly lit, presumably you are meant to listen to the trees’ secrets rather than look for them.

We continued on the path to the moonlit ball: dancers or ballerinas spinning to an enchanting waltz. We couldn’t quite figure out if these dancers were creepy or delightful, but I did appreciate the bright colours. 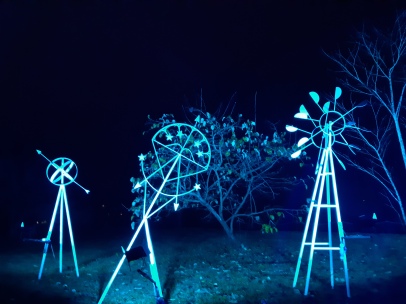 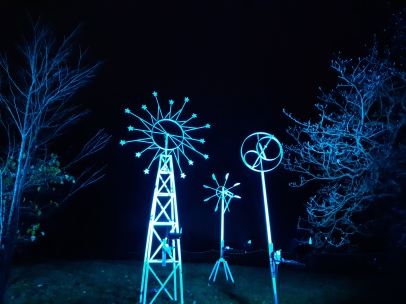 We continued on to see metal sculptures inspired by sun dials and astronomy. Many of these were made from recycled material, reflective of the fact that, we too, are recycled and made from stardust.

Walking onwards there were lanterns of shadows, music halted to play the voice of the last descendant of the first clockmaker’s assistant. To be honest, I couldn’t quite hear what was being spoken, so the secret still remains safe and hidden from me. 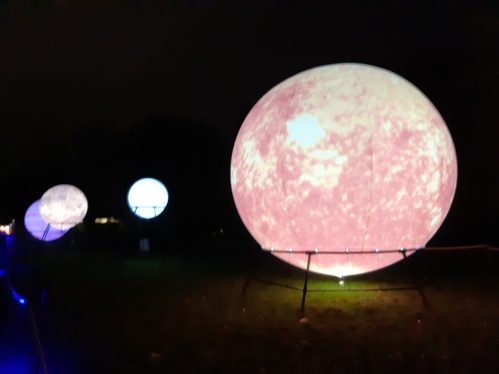 The final part was walking through the solar system. Large lantern balls illuminated the pathway with orchestral music playing in the background – a lovely way to end the light trail.

This event was put together with Wild Rumpus, who did really well. It reminded me of the Van Gogh immersive experiences I went to, utilising images and music to create a fuller experience – this was more 3D than the ones I’ve been to before.

It took us only 30 minutes to walk the trail, but as quite a bit of it was outside – I’m not complaining too much. Any longer and we may have been frozen! I was a little surprised by how small some of the displays were, as mentioned previously, you could easily walk past and miss some of the illuminations. It was a lovely atmosphere and I didn’t feel it was too crowded.

The light trail is running from 8 December to 3 January 2022 between 4pm and 8pm, with last admission to the trail at 7.30pm. Tickets are reasonably priced at £12.50 for adults and £8 for children and excludes palace entry and ice rink entry.

If you’re after something a little more festive and Christmas-related then there are other light trails more suitable. If you’ve been to Hampton Court before and really enjoyed it, I’d highly recommend going – and definitely if you have kids.

One thought on “Palace of Stardust at Hampton Court”